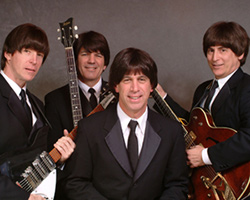 Relive the Music, the Magic and the Mania of a live Beatles concert. Comprised of four talented musicians from Philadelphia who duplicate the music of The Beatles by matching their accents, vocal sound, instrumentation and mannerisms, Liverpool Beat enhances its show with vintage guitars, sound equipment and costumes.

Having refined their act in the Broadway Show, Beatlemania, these entertainers banter during their performances with authentic Liverpool accents while imitating the antics of John, Paul, George and Ringo.

Your audience will re-live the timeless musical experience of The Beatles music through a performance by Liverpool Beat because they bring their knockout performance of the “early years” (1962-66) to every show they perform.

Liverpool Beat also offers a Three Act Show (reflecting the Beatles lives from 1962 to 1970) with the assistance of other performers from world-renowned Beatlemania.

For smaller theaters, Liverpool Beat offers a less expensive show, The Duo: McCartney & Lennon, which is the only duo tribute to the “Fab” performers in the nation.

Book any of these shows to provide your audiences with an evening of entertainment that returns them to a simpler era when times were good and the music was better–a welcome musical retreat during these troubled economic times.

“Of course, as you know we were proud to introduce Liverpool Beat as our featured act. Your fabulous band with its high energy, great Beatle’s sound, and “Star Like” performance really brought this event to another level. Thank you for all your help and a GREAT SHOW!”
–Bob Havens, President, Hear Foundation