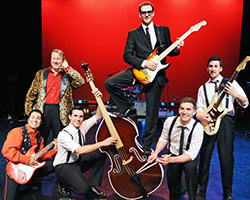 Formed in 2009 while performing together in the hit musical, BUDDY: The Buddy Holly Story, The Rave-ons offer a wide range of 50’s rockabilly classics including songs by Elvis Presley, Eddie Cochran, Gene Vincent, Bill Haley & The Comets, Little Richard, Carl Perkins and others.

They have delighted audiences in New York City, Reno, Memphis, Jacksonville, New Jersey, Pennsylvania, Arizona, Colorado, Missouri, and Illinois. Unlike other tribute bands of the same nature, all members of the Rave-Ons are in their twenties and give their shows a youthful energy and exuberance that cannot be matched.

They offer a second show featuring the music of Buddy, Ritchie Valens, and the Big Bopper entitled “The Night the Music Lived” which they are currently performing at the iconic BB King Blues Club in New York City. The show commemorates their final concert on February 2nd, 1959, at the Surf Ballroom in Clear Lake, Iowa .

Using information gathered from documentaries, books, and the memories of musicians at the show, Buddy’s last concert is recreated with utmost attention to detail and accuracy. Featuring classic songs like That’ll Be The Day, Peggy Sue, It’s So Easy, La Bamba, Oh Donna, and Chantilly Lace, The Night The Music Lived is a sure fire hit at theatrical venues.